The University of California, Riverside, is one of 11 founding members of the UIA, which launched in 2014. At its inception, the UIA presidents set a goal to graduate an additional 68,000 students above their baseline projections over 10 years, and committed that half of those students graduated would come from low-income backgrounds. Six years in, the UIA schools have exceeded that goal by graduating an additional 73,573 students, increasing the number of graduates from low-income backgrounds by 36% and graduates of color by 73%. The institutions are now projected to graduate a total of 136,000 by 2023 — double the original goal launched at the White House College Opportunity Day of Action in 2014.

Since the launch of the UIA, UC Riverside has graduated an additional 2,016 students, or 26.9% more than baseline projections, and has increased the number of low-income graduates by 47% and graduates of color by 71%. Its increase of almost 1,000 low-income graduates was third highest among the 11 UIA founding universities. 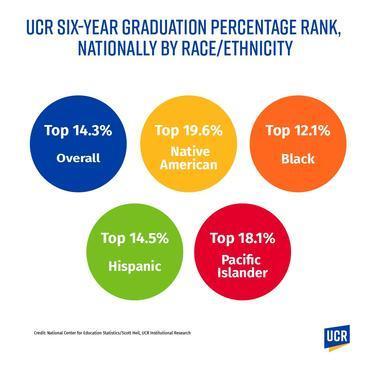 “Seven years ago, we became part of this national alliance that sought to emphasize the end goal — graduation — as the leading measure of success in higher education,” said Kim A. Wilcox, UCR’s chancellor. “From the outset, the group’s goals were ambitious. That the alliance, and UCR, has surpassed those goals is real cause for celebration.”

UCR has achieved near parity in graduation rates between underrepresented minorities, or URMs, and non-underrepresented minorities. URMs include Black, Latino, American Indian, and Pacific Islander students. From the 2014 cohort, 81.8% of Asian students graduated by 2020; along with 78.4% of white students; 78.1% of Black students; 73.7% of Latino students; and 62.5% of American Indian and Pacific Islander students.

As part of the Alliance’s next phase of work, campuses will focus on eliminating disparities in educational outcomes based on race and ethnicity, income, generational status, gender, and geography, all the while continuing to produce more graduates, innovate together, share data transparently, and hold down costs.

The Alliance’s work has included the scaling of predictive analytics, proactive advising, completion grants, a student success chatbot, and new career services practices across the member institutions. The alliance released its Completion Grant Playbook, based on its pilot, to provide $3.6 million worth of small grants to help nearly 5,000 students complete their degrees or remain enrolled in the university.

At UCR, UIA membership — and its graduation-rate surge — has run almost parallel the 2013 creation of a UC Riverside Graduation Rate Taskforce that produced 37 recommendations on how to improve graduation rates. Many of those recommendations have since been implemented, including limiting undeclared major status to one year; offering the most critical and high-demand courses more frequently, including during summer session; and “front-loading” the first-year fall academic calendar with engaging classroom lecturers.

“UC Riverside and its leadership have been a critical partner in our efforts to advance an ambitious agenda on the behalf of students,” said UIA Executive Director Bridget Burns. “The campus should be very proud of its progress to date, but we all know there’s more work to be done, and we look forward to this next phase of collaboration and innovation.”