How listening, collaborating, and experimenting leads to effective programs
December 03, 2020

Over the past two years, I have had the pleasure of working with an outstanding team of dedicated UCR staff, faculty, and students through a journey of exploration and experimentation -- all with the goal of empowering UCR students to reach their career goals. This work was part of the University Innovation Alliance’s “Bridging the Gap from Education to Employment” project, funded by Strada Education Network.

The UCR team started with a simple question: how might we better prepare UCR undergraduate students - particularly those from first-generation and low-income backgrounds - for careers? To answer this question, the team used human-centered design methodologies: applied an empathy-based approach to understand student needs; brainstormed many, many possible ideas for meeting those needs; and ‘tested’ those solutions to get feedback to ‘fail forward’ and make improvements rapidly. Over the course of a year, the BGEE team conducted in-depth conversations with over 160 students from all UCR colleges, years, and corners of campus to understand the barriers they face on their career paths and get their feedback on ways to smooth the path from college to career. That exploration culminated in a new model for internships: where students had the chance to work in a group of their peers to solve a real-world problem for a real employer - while receiving mentorship and a stipend -- all while never leaving campus (or in the case of 2020, Zoom).

This idea came to fruition thanks to a collaboration with the U.S. Environmental Protection Agency - a longstanding partner of UCR and a member of the UIA’s employer advisory board. In Summer 2020, the UCR Career Center and the U.S. EPA Region 9 co-created an internship program. Using a grant from the UIA, the Career Center hired six UCR undergraduates who collaboratively developed recommendations for reducing food waste on campus. These students participated in professional development from the Career Center; exposure to high-level EPA leaders during weekly guest speakers, mentorship from both UCR faculty/graduate students and EPA staff; and attended a virtual E.P.A conference. The internship program created a sense of community, opened up a new world of career goals and opportunity, and built their confidence – all while providing them with the chance to do what UCR students care so deeply about: contributing to their community. To hear about the impact of the program directly from student participants, check out this video. 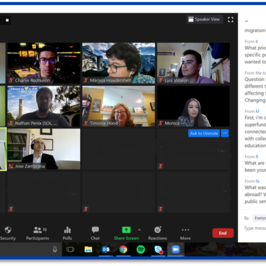 During a summer where opportunities disappeared due to the COVID-19 pandemic , UCR staff and the EPA worked creatively and collaboratively to adapt this internship program to a virtual environment. I’ve learned so much through this experience, and the many staff, faculty, students, and employers with whom I’ve worked. And while our project was focused specifically on career preparation, so much of what I’ve learned is applicable to how we approach collaboration, solve big problems, and support student success. I hope that these insights might prove valuable to others: 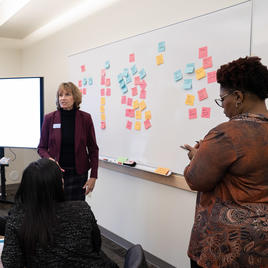 I recognize that many of these learnings might seem like a luxury - and impractical during times when our capacity is stretched as thin as it is now thanks to COVID-19. I would also argue that now is exactly the time to think about doing our work differently: to make sure we’re starting with students, encouraging cross-campus collaboration, being willing to experiment, and - most importantly - turning to students for their expertise. These are small changes that can help make student success professionals at UCR and beyond better able to face the unprecedented challenges of our era.

In closing, I want to thank the project team members, current and past, who worked so hard on this project - and provided me so many moments of laughter and learning along the way. I want to particularly thank Sean Gil, Elizabeth Montgomery, and Charlie Rodnuson (former Career Specialist) whose creativity, open-mindedness, incredibly hard work, and - most of all - unflappable commitment to students made this project a reality at UCR.

I also want to thank six UC undergraduate students who taught me about life at UCR, who interviewed dozens and dozens of students, who worked side-by-side with UCR staff and administrators, and whose commitment to improve UCR for their classmates and future students inspired and motivated me constantly. Anser, Elizabeth, Haley, Jonathan, Julia, Maricza -- it has been the greatest privilege to work with you all. Being the first to do something is always scary. You took on a difficult, ambiguous project - and showed just what incredible scholar-practitioners can do in a team.